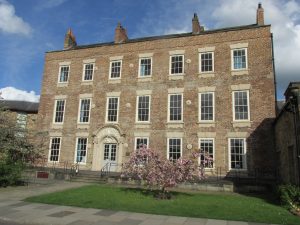 Recent relocations of the border have shifted the border toward the city. In the context of migration, a plethora of public and private and civil society actors at the urban scale now participate in the making and unmaking of the border and produce different degrees of ‘internal exclusion’ and shape entry, residence, and return or removal. This makes for the city a contested urban border space. However, studying this border relocation in my ongoing research project on “The Emergence of Urban Border Spaces in Europe” poses several theoretical and methodological challenges that need to be addressed. Thus, in this seminar Professor Margit Fauser wants to discuss the difficulty of locating the border in the city.

Existing literature on urban migration governance and the small literature on local immigration control generally opposes the state and the city, and to understand local variation selects city cases based on some independent variables, the structure of the political system, opportunity structures, or ideology of powerful actors. Departing from this literature and interested in border relocation as it reflects wider (global) dynamics, the methodology and theoretical interest of my project takes on board the critique of conceptualizing cities, and their relationship to other scales, as discrete, fixed and ontologically given. Rather, Professor Fauser considers the city from a multiscalar perspective, relationally interconnected in horizontal and vertical dimensions. This calls to theorize the city as territorial and administrative unit and as a series of unbounded activities. The project’s methodology uses an encompassing comparison-design and includes two global cities in two different European countries. While this is a helpful starting point for a comprehensive understanding of border relocation the implications for how to study and theorize the city and the border are less clear.

In the seminar, Professor Fauser will address and discuss some of the challenges. One key question that immediately emerges is: What is ‘the city’? As a classical and recurrent question in urban studies this usually refers to the urban properties of the city as compared rural or other locations. Yet, there is also the question of the city’s relation to the state, or the national scale, two dimensions that are often conflated. Thus, how can we understand urban border space’s relationship with the state? A second question concerns the comparative study of cities. How can similarities and variations of the urban border space be related to local and encompassing dynamics? And finally, a third question concerns the meaning of border relocation for the theorization of the border, socio-spatial differentiation, citizenship and belonging, since it is still an inter/national border, yet which has become less continuous and more fragmented, discontinuous, and territorially dispersed.

Engaging with critical border studies, urban studies and scaling theory, the anthropology of the state, and comparative urbanism the seminar invites a discussion among scholars interested in similar themes and together discuss the location of the border and the city in these current transformations.