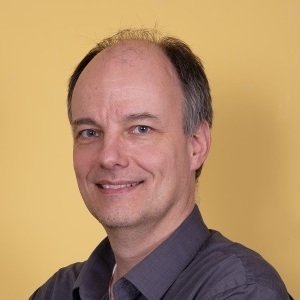 Jurriaan Huskens is Professor of Supramolecular Chemistry and Nanotechnology, and Chair of the Molecular NanoFabrication group at the MESA+ Institute for Nanotechnology at the University of Twente, The Netherlands. After obtaining his PhD at the Delft University of Technology in 1994, he pursued his postdoctoral studies with A. Dean Sherry (University of Texas at Dallas) and Manfred T. Reetz (Max-Planck-Institut für Kohlenforschung, Mülheim an der Ruhr, Germany), after which he became Assistant Professor in the group of David N. Reinhoudt at the University of Twente, The Netherlands, in 1998. From 2005 – 2008, he was Program Director “Nanofabrication” at the MESA+ Institute for Nanotechnology, leading a joint research program between research groups ranging from chemistry and physics to micro engineering. He was appointed full Professor “Molecular Nanofabrication” in 2005. Present research interests encompass: functional molecular layers at interfaces, supramolecular materials, multivalency, biosensing, nanofabrication, and solar fuels. He is a recipient of the Gold Medal 2007 of the Royal Netherlands Chemical Society. He is (co)author of approx. 350 refereed research papers and three patents.

Over the past decade, Professor Huskens has explored concepts and principles of multivalent interactions. Such interactions occur widely in biological systems, where many processes and interactions occur at interfaces. For instance, the interaction of the influenza virus with an epithelial cell in the host that the virus aims to infect is a textbook example of a multivalent interaction. Not only the binding itself is important, but even more so the dynamic process by which the interaction is being formed and by which it develops further, in the case of influenza leading to uptake (endocytosis) of the virus by the host cell. Chemical model systems are essential to provide a more systematic and quantitative approach to the understanding of multivalent interactions. Professor Huskens has been pioneering such model systems, and contributed to their fundamental understanding (see, e.g.,J. Am. Chem. Soc. 2004, 126, 6784). Recently, he edited a book called Multivalency: Concepts, Research & Applications (Wiley, 2018).

On a more practical side, technology needs to be developed to study multivalent interactions, and to employ the concepts of multivalency in devices, for example for bio-sensing purposes. As a result, many techniques have been developed and explored by Professor Huskens over the years, many of which in close collaboration with scientists from a variety of backgrounds, such as physics, electronics, and engineering. In collaboration with Durham’s Professor Kislon Voitchovsky (Physics), the aim will be to design and test a chemical platform, ultimately to be implemented in a microfluidic device, to bind exosomes, which can be viewed as biomarkers to diagnose cancer, by specific and multivalent interactions.

The study of molecular and biomolecular systems and processes can create images that have esthetic value, showing symmetry and symmetry breaking, life-like dynamics, etc., that may resonate with scientists and artists of different disciplines. Throughout his career, Professor Huskens has been fascinated by these visual elements, their beauty, and the often simple laws and numbers that underlie their often more complex expression. As an example, a two-dimensional membrane is a beautifully symmetric biological object, and when zooming in on it, it is not evident which side is inside the cell and which outside. The interaction of a particle, be it an exosome or virus, disrupts the symmetry and causes a dynamic process, for example endocytosis, by which the membrane starts to first interact and then completely engulf the particle. Professor Huskens hopes to arouse the interest from visual artists and many others, not in the least young people and the general public.