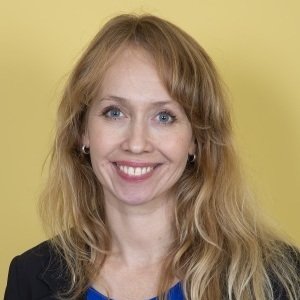 Johanna Poutanen is Head for Women in Peacemaking at the Crisis Management Initiative (CMI). CMI, founded by Nobel Peace Prize Laureate President Martti Ahtisaari, is one of the world’s leading independent organisations specialising dialogue and mediation. In her current role, Johanna Poutanen leads CMI’s work on strengthening women’s inclusion in peace mediation. This entails both tailored support to women’s participation in specific conflict prevention and conflict resolution processes, as well as enhancing gender sensitive mediation capacities of key actors in the field globally.

Johanna Poutanen has extensive experience in peace mediation and conflict management, with specialist expertise in women and youth participation in peace processes. Prior to her current role, she served as CMI’s Country Manager for South Sudan based in Juba 2013-2015; leading the country-level support to a high-level dialogue process within the ruling party, alongside cross-track dialogue initiatives with women parliamentarians and national youth leaders. Before joining CMI, she worked to support constructive cross-party dialogue in transition contexts with emphasis on youth and women’s participation. From 2007-2010 she was based in Kathmandu, Nepal, where she facilitated a pioneering dialogue platform among the major parties’ youth and student wings as part of the country’s peace process. She has also worked for a variety of international agencies in the field of peace and security, including the Strategic Planning Unit of the UN Secretary-General in New York and the Finnish Embassy in Nepal; and grassroots dialogue initiatives in e.g. Northern Ireland, Kosovo and Kenya.

Johanna Poutanen holds an M.Sc. degree in Diplomacy and World Politics from the University of Helsinki; and a Master’s degree in Public Administration from the Harvard Kennedy School of Government, where she pursued advanced studies in conflict, democracy and negotiations as a Fulbright scholar. During her academic studies, she has received numerous scholarships for academic excellence, including Fulbright ASLA and Rotary graduate grants.

During her stay in Durham, Johanna Poutanen will take part in an IAS sponsored project, Mediation for the 21st Century: connecting the local and the global, which is led by Dr Catherine Turner (Durham Law School) and Dr May Darwich (Government and International Affairs). With an overarching focus on gender in peace mediation, her research focuses on the interplay between women’s political agency and specific mediation strategies and frameworks. Drawing on her practitioner’s standpoint and first-hand experience, she will explore the theme through empirical case studies, such as the recent mediation process in South Sudan. She is particularly interested in exploring how our understanding of modern mediation can be enriched with perspectives drawn from democratic theory. This timely project will undoubtedly provide important opportunities to inform both theory and praxis of peace mediation, and to this end, Johanna Poutanen is looking forward to collaborating with Dr Turner and Dr Darwich, and the team of esteemed scholars and other practitioners of international standing.