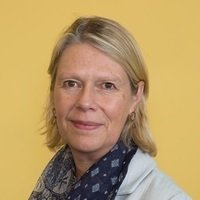 Penny Harvey is Professor of Social Anthropology at the University of Manchester. She has carried out ethnographic research in Peru, Spain and the UK and published widely on politics and power, on language, information and communications technologies, and on knowledge practices with a particular focus on engineering practice and technical expertise. Although her own research is grounded in anthropological theory and methods, Professor Harvey has always been committed to interdisciplinarity. She worked for six years at the Institute of Latin American Studies at the University of Liverpool, before moving to Manchester in 1991. For the past ten years she has worked in the ESRC Centre for Research on Socio-Cultural Change (CRESC), latterly as the Convening Director.

Within CRESC Professor Harvey convened an interdisciplinary research group working on the social dimensions of infrastructural development. Building on research collaborations with a wide range of partners: from engineers, planners, and policy makers who are devising methods of bringing about and accounting for infrastructural change; to activists and artists who are reimagining society through alternative renderings of infrastructural relations, this group developed methodological and theoretical approaches that established the significance of material relations for engaging the socially transformative effects of projects of infrastructural change. Professor Harvey’s own work within this group has focused on roads, waste and sanitation, and on information systems, and the promise and limitations of ‘big data’ for public sector service provision.

Professor Harvey’s other key contribution has been her on-going work on the anthropology of the state. Her most recent research project, “Experimental States”, is a collaborative ethnographic study of expert knowledge and regional government in Cusco, Peru. The research looks at contemporary (neoliberal) state form, focusing on two main issues: firstly how government experiments with, and constructs moral legitimacy in relation to new forms of regulatory authority and technical expertise; and secondly how the normative imaginaries of nature, resources, territory and law that inform cultural understandings of the nation state are articulated with respect to newly formed instances of the state, in this case the regional government of Cusco.

Since 2012 Professor Harvey has been Professor II at the University of Oslo, and she has also previously held a similar position at the University of Bergen (2004-2006). With Professor Tony Bennett (University of Western Sydney) and Professor Kevin Hetherington (Open University) she is editor of the Routledge book series, Culture, Economy and the Social. She has twice served as Chair of the Anthropology Review Panel for the Danish Council for Independent Research, and she was also a member of the review committee for Cultural Anthropology in the Netherlands in 2013.

While at the IAS, Professor Harvey will be finalizing the monograph on decentralization and regional government in Peru which she is co-writing with Professor Deborah Poole (Johns Hopkins University). She is also working with Casper Bruun Jensen and Atsuro Morita on a large edited collection on Infrastructures and Complexity. She is looking forward to working closely with colleagues in Durham, at the IAS, in Anthropology and in Geography to develop a new comparative study of infrastructures and changing state forms.