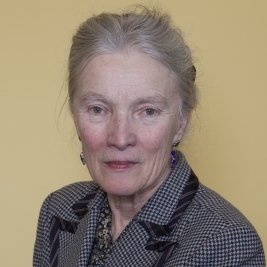 Ann Banfield, who has a Ph.D. in English from the University of Wisconsin and studied linguistics at MIT from 1966-8, is Florence Bixby Professor of the Graduate School in the English Department at the University of California, Berkeley, where she has taught since 1975. She has also taught at the Université de Paris 8 from 1969 to 1970 and in linguistics at the University of Washington from 1973 to 1975. She returned as visiting professor to the Université de Paris 8 in 1992-3 and 1999 and taught as an Old Dominion Fellow of the Humanities Council in Comparative Literature at Princeton in 2006. She was a Woodrow Wilson Fellow in 1962-3, had an ACLS Study Fellowship for philosophy of language in 1977-8 and was a Guggenheim Fellow in 1982-3 and a University of California President’s Fellow in 1993-4. She was a Scholar in Residence at the Rockefeller Foundation’s Bellagio Study Center in 1994 and 2005.

Banfield has written extensively on the intersection of linguistics and literature and on British and Irish Modernism. Beginning with “Narrative Style and the Grammar of Direct and Indirect Speech” in 1973, she has published on various aspects of the syntax of the novel, most particularly on the language for the representation of subjectivity and on narrative time and tense. This work culminated in Unspeakable Sentences: Narration and Representation in the Language of Fiction, which appeared in 1982 and which was translated into French as Phrases Sans Paroles: Théorie du Récit et du Style Indirect Libre in 1995.

In The Phantom Table: Woolf, Fry, Russell and the Epistemology of Modernism, which appeared in 2000, Banfield explored the relations between Cambridge philosophy and the novels of Virginia Woolf. “Tragic Time: The Problem of the Future in Cambridge Philosophy and To the Lighthouse” (2000) and “Time Passes: Virginia Woolf, Post-Impressionism and Cambridge Time” (2003) pursued the relations between philosophical theories of time and Woolf’s formal experiments on narrative time. Banfield also translated and introduced Jean-Claude Milner’s For the Love of Language in 1990.

Currently Professor Banfield is completing a book on Samuel Beckett centered on Beckett’s radical refashioning of the mother tongue into a literary language that is no one’s mother tongue, for which both Dante and Joyce provided models. The study will draw importantly on work on the lexicon in recent generative grammar. Part of this project has appeared in article form, most notably in “Beckett’s Tattered Syntax” (2003).

Professor Banfield will be participating in the research project “Modernism and Resistance to Translation.” Her specific concern will be with the quite idiosyncratic way translation operates at the heart of Beckett’s work. Moving back and forth from English and French, Beckett developed a literary language that is ultimately at the antipodes of Dante’s “illustrious vernacular” and Joyce’s “Wakese”, both conceived as combinations of different vernaculars. She will examine the connection between those works and words Beckett pronounced “untranslatable” and the concept of the maternal language.