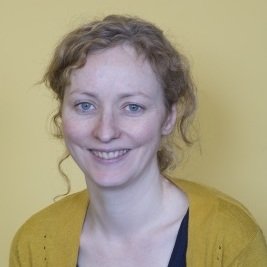 Angharad Closs Stephens is a Lecturer in Human Geography at Durham University. Her research interests derive from a general interest in developing critical approaches to the study and politics of nationalism. This work combines several lines of inquiry, including, the politics of security and the governing of differences; how ideas of space/time enable different ways of imagining and understanding politics; and how urban theories and writings on cities offer an alternative entry point to the study of coexistence.

This work was brought together in her first monograph which was published in 2013, titled, The Persistence of Nationalism: from imagined communities to urban encounters (New York, London: Routledge). This is a book about the difficulties of thinking and acting politically in ways that refuse the politics of nationalism. It offers a detailed study of how contemporary attempts by theorists of cosmopolitanism and globalism to go beyond the nation often reproduces key aspects of what she terms, a ‘nationalist imaginary’. The book argues that we need to re-open the question of what it means to imagine community and that we might do so through the site of the city.

Work on the politics of security has included a co-edited book (with Dr Nick Vaughan-Williams) studying critical responses to the London bombings of 7 July 2005, Terrorism and the Politics of Response (2009) and a number of research articles exploring different aspects of the ‘imaginative geographies’ of the War on Terror (2007, 2011). The interest in reformulating ideas of coexistence (in ways that defy a ‘nationalist imaginary’) has also been developed in a research article on sites of memory in Berlin (2010) and a co-written article (with Dr Vicki Squire) that uses an art installation to rework the idea of ‘community’ (2012). Both these articles experiment with non-linear ideas of time and non-bounded understandings of space and how these might provoke other entry-points to the study of politics. These have led to a broader interest in how aesthetic interventions, including literary texts (2011), prompt different ways of understanding relations with others in the world.

Dr Closs Stephens holds a Master’s degree in Gender Studies from the LSE, and a Master’s and PhD in International Relations from Keele University. She previously studied for a BSc in International Politics in her home town of Aberystwyth, Wales. From 2007-2011, she was co-convenor of the British International Studies Association Poststructural Politics Working Group.

Dr Closs Stephens’ Fellowship will enable her to address in greater depth how literary texts engage the question of what it means to coexist with others across times and cultures. Arguing against the idea that developing better affective connections with others relies on ‘improving’ that which we able to see, she will address how novels shape the political by suggesting a different way of seeing. Her time at the IAS will enable her to establish the intellectual foundations for her next monograph, tentatively titled, Nationalist Atmospheres.