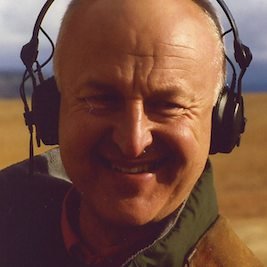 Chris Watson is an IAS Policy & Enterprise Fellow. He is a leading recorder of wildlife and natural phenomena. His sound recording career began in 1981 when he joined Tyne Tees Television and since then he has developed a particular and passionate interest in recording the wildlife sounds of animals, habitats and atmospheres from around the world. As a freelance recordist for film, TV & radio, Chris specialises in natural history and documentary location sound together with track assembly and sound design in post production. He is renowned for his award-winning wildlife work with Sir David Attenborough on productions such as The Life of Birds and The Life of Mammals.His television work also includes Back in the USA, Springwatch, Autumnwatch and The One Show. He has appeared on many BBC Radio productions including A Guide to Garden Birds, the Reed Bed, Jules Verne’s Volcanoe, The Ditch, Elegies from a Suburban Garden, The Wire and more. He also makes performances, live sound installations and specialises in multi-channel works, for example, recreating the sound of John Constable’s “The Cornfield” in front of the original painting at The National Gallery in London.

In 2006 he was awarded an honorary Doctor of Technology degree by the University of the West of England in recognition of his outstanding contribution to sound recording technology, especially in the field of natural history and documentary location sound”. In 2010 he devised an art project at Liverpool’s Alder Hey Children’s Hospital, using sound recordings made by children to calm other young patients as they received injections and other treatments. In the same year he initiated The Bee Symphony with Marcus Davidson & Mike Harding, which was originally commissioned by Pestival at The South Bank, London and also in 2010 Chris’s Whispering in the Leaves sound installation immersed visitors to Kew Gardens’ Summer Festival with the dawn and dusk choruses of the Central and South American rainforests.

At the IAS Chris will collaborate with the Music Department and the Science Faculty to produce a proposal aimed at enabling an interdisciplinary collaboration with the natural sciences on ‘The Sounds of Time’; and to produce a sound installation to complement the Lindisfarne Gospels, composed of the sounds that St Cuthbert would have been surrounded by on Holy Island.