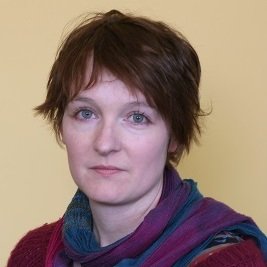 is a Professor in German at University College Cork. Her interests lie in nineteenth- and twentieth-century German, Austrian, and comparative literature; utopian fiction and theory; gender theory; and biography.

Her research aims to bring the collective fantasy of utopia into dialogue with the singular reality of biography, and to show that these two categories are not as far apart from each other as it might seem. Her first book, Sex in Imagined Spaces: Gender and Utopia from More to Bloch (Oxford: Legenda, 2010), examines the re-imagined sex-gender systems of past futures, in order to offer a critical account of the relationship between gender discourse and utopian thought. Reading utopia as a dialogue between history and possibility, the book examines alternative constructions of gender and sexuality in the utopian tradition since More, in the classic dystopias of the twentieth century, and in little-known and unpublished texts of the fin de siècle. Dr Ní Dhúill has also published widely in the fields of modern German and Austrian literature, with recent and forthcoming articles and essays on Hugo von Hofmannsthal, Ingeborg Bachmann, Frank Wedekind, Ilija Trojanow and Ernst Bloch.

Her current major research project, Lives of Others, seeks to account for the complex, dynamic relationships between lived and narrated life. Locating its primary materials in the literature and philosophy of German and European modernism, the project starts by confronting the limitations of biography as a hermeneutic framework for the reception of literature. It engages with current and historical debates about and against biography, bringing these into dialogue with perspectives from gender theory, literary theory and theories of subjectivity. While committed to the view that biographical approaches are an integral part of any culture’s engagement with the past, and particularly with its literary heritage, the Lives of Others project aims to trace an antibiographical tradition in which the questioning or refusal of the biographical paradigm leads to alternative, disenchanted, yet creative approaches to the traces of past lives and to the narratives they generate.

Since completing her PhD in Germanic Studies at Trinity College Dublin in 2005, Dr Ní Dhúill has taught German language and literature at the universities of St Andrews, Durham and Vienna. From 2005-2009, she was a full-time postdoctoral researcher at the Ludwig Boltzmann Institute for the History and Theory of Biography, Vienna. She convenes the research group Literature History Theory based at the School of Modern Languages and Cultures, Durham, and is co-editor of the journal Austrian Studies. She is also an affiliate of the Centre for Medical Humanities. During the period of her IAS Fellowship, she plans to complete a chapter of her monograph Lives of Others, and will be actively involved with the research activities around ‘Narrating Time’ and ‘Living Time’.