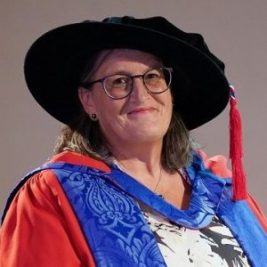 Monica Grady is Professor of Planetary and Space Sciences at the Open University (OU) in Milton Keynes. Her undergraduate studies were at the University of Durham (1976-1979) in the Departments of Chemistry and Geology, and she was a member of St Aidan’s College (an Aidan’s Maiden) – so fellowship of the IAS is a very welcome return to Durham. Monica’s postgraduate studies were at the University of Cambridge (1979 -1983), where she completed her PhD in carbon in meteorites. She subsequently worked at the Open University (1983 – 1991) before joining the Department of Mineralogy of the Natural History Museum in London, first as a Higher Scientific Officer with responsibility for meteorites, eventually as Head of the Meteorites and Cosmic Mineralogy Division. Monica was Honorary Professor in the Department of Earth Sciences at University College London (2004-2007) and Senior Visiting Research Fellow in the Planetary and Space Sciences Research Institute at the Open University (2001), before rejoining the OU in 2005 in her current position.

Monica’s research interests are in the fields of carbon and nitrogen stable isotope geochemistry of primitive meteorites and of martian meteorites, interstellar components in meteorites, micrometeorites, and also in astrobiology and the possibilities of life elsewhere in the cosmos. She also has expertise in infra red and optical microspectroscopy, and has worked with astronomers in order to make connections between dust observed around stars with that analysed in the laboratory. Monica is currently working with a team of Norwegian scientists to develop a miniature combined infra red spectrometer and microscope, for deployment on the surface of Mars or an asteroid.

Monica has led major research programmes in study of meteorites. Her main work has been in trying to understand the history of carbon and water on Mars, and interactions between surface, atmosphere and hydro(cryo)sphere. She has pursued this through investigation of minor components in martian meteorites, components that were formed by alteration processes on the surface of Mars. Over the past few years, data gathered by remote spectroscopy from orbiting satellites has allowed results from meteorites to be linked with the martian surface.

Monica is a member of STFC’s Science Board and ESA’s Solar System Advisory Committee. She was an Associate editor of Geochimica Chemica Acta from 2002-2005, and of Elements from 2004-2007. Asteroid (4731) was named “Monicagrady” in her honour. In 2003, Monica gave the Royal Institution Christmas lectures on the theme ‘Voyage in Space and Time’.

Monica is married to Professor Ian Wright, one of the lead scientists on the Rosetta cometary mission and Beagle 2 mission to Mars, and they have one son, Jack (aged 19). During her time at the Institute of Advanced Study, Monica Grady will be working with Professor Ian Wright, as well as with colleagues in the Departments of Physics and of Earth Sciences. Monica is looking forward to using her time at the IAS to prepare a major monograph on the mineralogy of Mars’ surface.