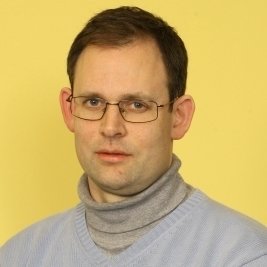 Dr Ingo Gildenhard, currently a Reader in Latin Literature and Roman Culture in the Department of Classics & Ancient History at Durham, received his BA from Pomona College (Claremont, California, 1992) and his PhD from Princeton University (1999). After spending seven years at King’s College London, he moved to Durham in 2006. He has also held a visiting professorship at the Università di Roma (La Sapienza, 2002-3) and a visiting fellowship at Clare Hall, Cambridge (2006). At Durham he has been instrumental in founding, and is now directing, the Centre for the Study of the Classical Tradition.

The Classical Tradition is one of his main areas of research, and he is in the process of co-authoring a monograph entitled The Classical Tradition: art, literature, thought (with Michael Silk, King’s College London and Rosemary Barrow, Roehampton University), which is under contract with Blackwell for 2009. Other areas of expertise lie in Latin literature (in particular Cicero and Ovid), Roman culture (especially the Roman republic), and Wissenschaftsgeschichte, including the history of theories and methods in the cultural sciences, mainly from 1800 onwards. He has co-edited a volume entitled Out of Arcadia: Classics and politics in Germany in the age of Burckhardt, Nietzsche and Wilamowitz (London, 2003), which focuses on the ideological struggles within German Classics in the period 1880 – 1932. A monograph on Cicero, Paideia Romana: Cicero’s Tusculan Disputations, appeared last year (Cambridge, 2007) and he is currently completing a second entitled Cicero‘s Platonic oratory: visions of the self, the supernatural, and society (Oxford, 2009).

Dr Gildenhard’s aim during the fellowship is to make headway on a large, multi-disciplinary project on identity and flux in Western conceptions of humanity. His point of departure is the fact that anthropological thought in the Western tradition tends to privilege essences and identities. Judeo-Christian theology, classicizing artistic ideals, and scientific rationality all insist on more or less clear-cut distinctions between the human and non-human, the self and the other, and, accordingly, marginalize the monstrous and the metamorphic. At the same time, as countless works of the imagination remind us, the boundary between cultural orthodoxy and its discontent remains inherently unstable and the very principle of instability has found monumental epic articulation in Ovid’s Metamorphoses, the ‘bible’ of artists and painters. During his tenure as IAS fellow, he plans to explore the relation of identity and flux in Western conceptions of the human being with specific reference to visual and literary sources that juxtapose or conflate sujets from the Metamorphoses and the Bible.

He is further involved in the ‘Being Human’ theme as the organizer of an international workshop on ‘Myths of transformation’ (September 2008), as the organizer of a lecture series entitled ‘Being Human – Classical Perspectives’, jointly funded by the Department of Classics & Ancient History and the Centre for the Study of the Classical Tradition, and as the co-organizer of the IAS public lecture series on ‘Figuring the Human’ (with Charles Fernyhough).