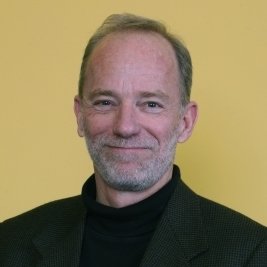 Professor Mark Turner is Institute Professor and Chair of Cognitive Science at Case Western Reserve University. He studies the nature and emergence of higher-order cognitive operations that distinguish human beings from other species and appear in the record of our descent during the Upper Paleolithic. With Gilles Fauconnier, he originated the theory of conceptual integration, otherwise known as “blending,” in 1993. Recently, he has focused on the way in which conceptual integration provides mental powers for compressing and decompressing conceptual structure to provide a basis for situated thought and action. He has published studies of language, grammar, reason, choice, analogy, counterfactuals, creativity, invention, conceptual and linguistic systems, the origin of language, material anchors for thought, distributed cognition, figure and narrative in thought and language, evolutionary theory of meaning, poetics, style, and the literary mind. His B.A. and M.A. in mathematics are from Berkeley, as are his B.A., M.A., and Ph.D. in English language and literature.

Professor Turner’s most recent book publication is an edited volume, The Artful Mind: Cognitive Science and the Riddle of Human Creativity, from Oxford University Press. His other books include Cognitive Dimensions of Social Science: The Way We Think about Politics, Economics, Law, and Society (Oxford), The Literary Mind: The Origins of Thought and Language (Oxford), Reading Minds: The Study of English in the Age of Cognitive Science (Princeton), and Death is the Mother of Beauty (Chicago). His jointly-authored books include The Way We Think: Conceptual Blending and the Mind’s Hidden Complexities (Basic), Figurative Language and Thought (Oxford), Clear and Simple as the Truth: Writing Classic Prose (Princeton), and More than Cool Reason: a Field Guide to Poetic Metaphor (Chicago).

Professor Turner has been a fellow of the Institute for Advanced Study, the John Simon Guggenheim Memorial Foundation, the Center for Advanced Study in the Behavioral Sciences, the National Humanities Center, and the National Endowment for the Humanities. He is Extraordinary Member of the Humanwissenschaftliches Zentrum der Ludwig-Maximilians-Universität, External Research Professor at the Krasnow Institute for Advanced Study in Cognitive Neuroscience, and Distinguished Fellow at the New England Institute for Cognitive Science and Evolutionary Psychology. In 1996, the Académie française awarded him the Prix du Rayonnement de la langue et de la littérature françaises.