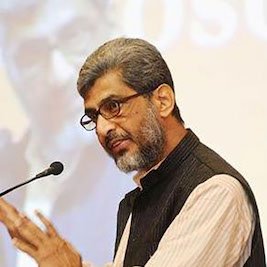 Professor Nirmalangshu Mukherji is a Professor of Philosophy at the University of Delhi where he has been teaching for nearly two decades. He started out aiming to become a philosopher of science, drifted into epistemology, moved on to classical philosophy of language, became drawn to cognitive science, and somehow ended up looking at biolinguistics, nature of musical organization, and the general properties of the human mind. Beginning with his Ph.D. thesis titled “Language and Definiteness”, he has been interested in the question of whether the nature and function of human languages can be subjected to systematic inquiry. With his basic location in philosophy, this interest translated into examining the foundations of linguistic inquiry. There are two major historical directions to this issue: the logic-centered philosophical work on language initiated by Gottleb Frege and Bertrand Russell, and the more recent biolinguistic programme proposed by Noam Chomsky.

After pursuing the project in a range of papers and monographs, in his recent book, The Primacy of Grammar, he has suggested that scientific understanding of human languages is essentially restricted to the grammars of these languages. This restriction to grammar, so delinked from ‘language,’ opens the possibility that the computational system of human language may be involved in each cognitive system that requires similar computational resources. A mixture of analytical argumentation, varieties of empirical (including introspective) evidence, and some speculation suggests a picture in which a computational system consisting of very specific principles and operations is likely to be centrally involved in each articulatory symbol system, such as music, that manifests unboundedness. In other words, the suggestion is that the following things converge: (a) the scientific character of biolinguistics, (b) its isolation from the rest of science and, thus, from the rest of human inquiry, (c) its basic explanatory form, namely, the computational-representational framework, and (d) the domains of its application.

His current work generally falls under what is now known as internalist approaches on human language. Among other things, he hopes to examine how the human linguistic system interacts with non-linguistic systems to ‘give’ the world to us so that we can talk about it on favourable occasions. The major part of his stay at the Institute of Advanced Study will be devoted to writing out the research conducted on this project upto that time. Additionally, he hopes to engage actively with colleagues at Durham to undertake research on the last part of the project on non-linguistic systems, especially the interaction between the language and the visual systems.

Professor Mukherji is also professionally interested on general questions of life, including the character of philosophical practice. There is no conscious attempt, but sometimes these two apparently disjoint interests seem to merge. There is also a third, more recent interest: to do something about peace, justice, human rights. He has lectured widely on these topics and has held visiting assignments in several universities and institutions across the world.