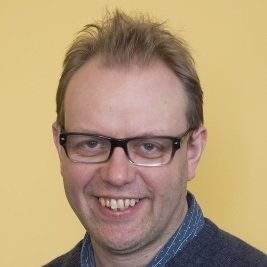 Dr Jon Hesk is a Senior Lecturer in Greek and Classical Studies in the School of Classics at the University of St Andrews. He is a specialist in the literature and cultural history of archaic and classical Greece. He did his undergraduate degree in Classics at Corpus Christi College, Oxford. In 1991 he moved to King’s College, Cambridge to start his PhD. Following a brief spell as a lecturer at Reading University he was elected to a Research Fellowship at St. John’s College, Cambridge (1995-1998). He has been at St Andrews since 1998. In 2003 he was Visiting Scholar in Classics at Wooster College, Ohio.

Dr Hesk’s first book, Deception and Democracy in Classical Athens (Cambridge, 2000), dealt with the representation and evaluation of deception and lies in the dramatic and prose genres associated with democratic Athens of the 5th and 4th centuries BC. The book received very positive reviews internationally and was one of History Today’s ‘commended books’ in 2001. His second book was a detailed study of Sophocles’ Ajax (London 2003). Research for this book was funded by a grant from the Arts and Humanities Research Council and has become a standard reference point for students and scholars alike. Dr Hesk has also published numerous chapters and journal articles on Homer, Sophocles, Euripides, Aristophanes, the Athenian orators, the scholarly reception of Thucydides and (even) Terrence Malick’s film The Thin Red Line. He also has a blog called ‘Ancient and Modern Rhetoric’, has been known to do podcasts and occasionally writes book reviews for the Times Literary Supplement. He has given invited papers at universities in the UK, United States, Ireland, France, the Netherlands and Germany.

Dr Hesk’s more recent work has centred on contradiction at the heart of the Greek city-state: on the one hand, the polis prized creative, entertaining and devastating performances in verbal contests, often conflating the form of an argument with its substance; on the other, the city’s various written and performed genres exhibit the worry that insults, entertaining rhetoric and appeals to tradition or ‘values’ are usurping proper evidence-based proof, policy advice and intellectual argument. He aims to further explore this ‘performance/evidence tension’ and its significance while at Durham. This work will culminate in his third monograph, provisionally entitled Decision-making and evidence in Archaic and Classical Greece: an archaeology of intellectual and discursive virtue. The book will look at representations of, and thought about, what constitutes a good decision and how good decisions get made (or thwarted) in Homeric epic, archaic lyric and classical Greek poetry, drama, philosophy, historiography and oratory. As well as advancing our understanding of the causes and development of ‘evidence-based thinking’ among the ancient Greeks, this book will use the ancient material to contribute to ongoing debates about the character and viability of ‘epistemic democracy’, whether at state and inter-state levels or within organizations.