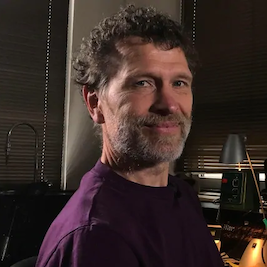 Lev Tarasov holds the Canada Research Chair in glacial dynamics modelling and is an associate professor in the Department of Physics and Physical Oceanography at Memorial University of Newfoundland and Labrador. He completed a PhD in theoretical physics at the University of Toronto while running an organic farming operation. Leaving a life of “head in the clouds and feet in the earth”, he moved into the Earth Systems Modelling field to combine interests in the environment and in the modelling of complex systems with a physics background.

Professor Tarasov is especially interested in quantifying uncertainty and the reduction thereof through the integration of observational data and modelling. For such purposes, he is pioneering the development and implementation of approaches using artificial neural networks to emulate expensive Earth Systems Models. In simpler terms, the goal is to generate meaningful error bars for predictions of climate change (be it in the future or deep past).

As leader of the INQUA-sponsored international Meltwater Ocean Cryosphere Atmosphere response network, he endeavours to bridge the gap between the glacial modelling and geological communities. His reconstructed deglacial ice-sheet chronologies are used by scientists around the world for modelling past glacial climates.

During his time at the IAS, Professor Tarasov will take part in the interdisciplinary venture ‘Quantifying Output Uncertainty in Models used for Climatic Change Research’. With colleagues at Durham, he will also explore ways to create joint probability distributions for a hieararchy of Earth Systems Models. This would provide a statistically rigourous approach to combine simpler models that can be run over centuries or millennia of model time with expensive and more physically accurate models that require large computational resources to achieve even 50 years of model time. He will also further collaborations with colleagues in the department of Geography constraining the deglacial history of Greenland and Antarctica and examining the role of ice streams in the evolution of the North American ice sheet.