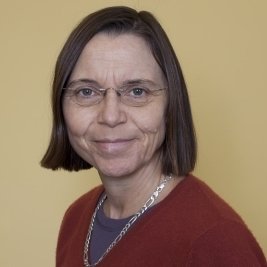 Sarah Green, who is a professor of Social Anthropology at the University of Manchester, is a specialist on location, borders and spatial relations. She has been exploring these themes, both in their literal and metaphorical meanings, since her doctoral research at the University of Cambridge, though the subject matter of her research over the last 20 years has been diverse. That has included: the politics of gender and sexuality in London; the engagement with Information and Communications Technologies in Manchester; shifting conceptions of environment and land degradation in the Argolid Valley and northwestern Greece; concepts of border relations on the Greek-Albanian border; the circulation of money in the Aegean; the concept of trust amongst new financial elites in the UK, part of her work as a co-ordinator within the ESRC Centre for Research in Socio-Cultural Change; and, most recently, the shifting concept of border in the eastern peripheries of Europe.

Professor Green has published particularly widely on the topic of borders, and her book Notes from the Balkans (2005; Princeton University Press) won the American Anthropological Association’s Douglass Prize for best contribution to Europeanist Anthropology. The book is now a standard text in many courses on the anthropology of Europe, both within Europe and in the USA. Her earlier work on gender and sexuality, and notablyher book, Urban Amazons (1997), has become a standard ethnographic text in ethnographic studies of gender and sexuality.

In 2008, Professor Green launched an international research network, EastBordNet, now funded by COST, dedicated to developing new approaches towards the study of borders on the eastern peripheries of Europe, from the Baltics and environs down to the Balkans and environs. The network (see www.eastbordnet.org) now involves 27 countries and over 280 researchers, and it has just completed its first international conference in Catania, Italy.

In 2011, Professor Green was invited to act as the Executive Program Chair for anthropology’s largest annual international conference, the American Anthropological Association conference, involving some 6000 participants. to be held in Montréal in November (see. www.aaanet.org/meetings). Professor Green designed the theme of the conference, “Traces, Tidemarks and Legacies,” which closely matches the work of EastBordNet, and is also related to the work Professor will be doing as a guest of the IAS in Durham.

Professor Green has been a visiting professor at the Centre of Excellence in Political Thought and Conceptual Change in Finland; at the Department of Social Anthropology at the University of the Aegean; and a visiting research fellow at Churchill College, Cambridge.

While at the IAS at Durham, Professor Green will be writing up fieldwork on shifting border relations in the Aegean, preparing edited collections on borders research from the EastBordNet project and developing a new collaborative research program called Tidemarks, aimed at further developing a fresh conceptual approach towards the study of bordering practices.