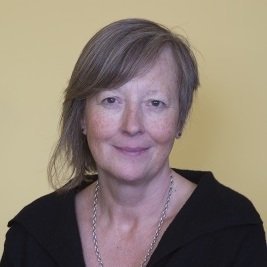 Linda Francewas born in Newcastle upon Tyne. After some time living away, including studying at the University of Leeds, she returned to the North East in 1981. She is currently based near Hadrian’s Wall in Northumberland, where she works as a freelance writer, editor, tutor and mentor. For the past 30 years she has taught in Adult and Higher Education, for Newcastle University, the Workers’ Educational Association and the Arvon Foundation, as well as in a wide range of community settings.

In 1988 and 1989 Linda won First Prize in the Bloodaxe Books/Evening Chronicle Poetry Competition, which led to the publication of her first collection, Red (1992). Her subsequent poetry collections include: The Gentleness of the Very Tall, a Poetry Book Society Recommendation and long-listed for the Los Angeles Times Book Award (Bloodaxe 1994); Storyville, a collaboration with visual artist Birtley Aris and musicians Keith Morris and Lewis Watson (Bloodaxe 1997); The Simultaneous Dress (Bloodaxe 2002) and The Toast of the Kit Cat Club (Bloodaxe 2005), a biography in verse of 18th century traveller and writer, Lady Mary Wortley Montagu.

Among her latest publications are book of days (Smokestack Books 2009) and You are Her (Arc Publications 2010). In 2012 Border Song, a collaboration with artist Kim Lewis, was published by Hareshaw Press. Linda also edited the acclaimed anthology Sixty Women Poets, a Poetry Book Society Special Commendation (Bloodaxe 1993). To mark its 20th anniversary an essay was commissioned for the spring 2013 edition of Poetry Review.

She has worked on a number of collaborations with visual artists and musicians and around 40 Public Art projects; also designing a syllabus and teaching on the subject at Newcastle University. Permanent and temporary works have appeared in stone, metal, wood, glass, textiles, ceramics, paper, sound and light.

Linda received a Tyrone Guthrie Award in 1991, the Arts Foundation Poetry Fellowship in 1994, a Fellowship at the Fine Arts Work Center, Provincetown, Massachusetts in 1998, Hawthornden Fellowships in 1999 and 2007, a Poetry Society Poetry in Public Places Residency in Mowbray Park, Sunderland, in 2000. She won Joint First Prize in the Stand Poetry Competition in 1996 and First Prize in the Yorkshire Open Poetry Competition in 2013.

Linda was Leverhulme Artist in Residence at Moorbank Botanic Garden, Newcastle University, 2010 – 11, creating a pamphlet of poems and a sculptural installation in the Desert House, referencing Nocturnal Photosynthesis. In 2012 she received a major Arts Council England Award to continue her research into plant ecology in preparation for a new book of poems. She will be visiting Botanic Gardens in Durham, Padua, Oxford, Singapore, Sydney, Tokyo, Kew and Edinburgh.

Linda’s travels in the Southern Hemisphere are part of her exploration of the effects of light on plants and humans and the implications of changing global weather systems. Her current poems attempt to dismantle ideas of the dark Other, testing the limits of what is visible to the eye and language itself, inspired by her discovery of Australia’s ‘alien’ plants, trees and insects.