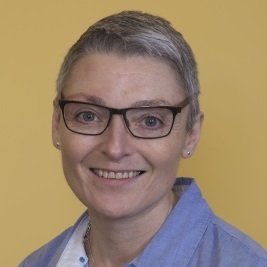 Anna McCarthy, Professor of Cinema Studies at New York University, is a specialist in visual culture with a focus on television, video, and digital media. Her approach to these phenomena is materialist in several senses of the word. Most notably, her work pays close attention to the physical forms and formats through which images circulate. At the same time, it demonstrates a continuing concern with the market relations that give images value and the structures of governance in which they are put to use. Her work is known for its interdisciplinary methodology, particularly its use of photography, and for its creative engagement with archival materials.

Professor McCarthy received her Ph.D. from Northwestern University and taught video production at the University of North Carolina for three years before moving to NYU in 1995. Her first book, Ambient Television: Visual Culture and Public Space (Duke University Press, 2001) examined the installation of video screens in a range of everyday spaces, uncovering the site-specific processes–control, commerce, community–that mediate our experience of place. The book was named one of Choice magazine’s top academic titles, and has been excerpted in several anthologies surveying the field. Articles linked to this project appear in several journals, among them October, Cinema Journal, The Journal of Visual Culture, and The International Journal of Cultural Studies. After completing this project, Professor McCarthy published a related anthology, co-edited with Nick Coldry, entitled MediaSpace: Place, Scale, and Culture in a Media Age (Routledge).

Professor McCarthy’s 2010 book The Citizen Machine (The New Press) looked at early efforts by corporate, philanthropic, and activist organizations to devise television programs that might advance particular civic agendae. These technocratic experiments in governing by television established terms for thinking about the audience and the nation that continue to shape strategies of reform in media today. In addition to appearances on BBC Radio and American public radio, Professor McCarthy’s public activities in connection with the book included programming an election year video show, exhibited at the Robert Rauschenberg Foundation Project Space in New York as part of the exhibition We the People co-curated by Alison Gingeras and Jonathan Horowitz.

Professor McCarthy is currently working on two research projects. One, still in the early stages of development, examines relations between the Catholic Church and broadcasting authorities in twentieth century Ireland. The second, which will be her focus while in residence at the IAS, concerns recent transformations in the work of writing and other forms of expressive labor following the rise of broadband digital infrastructure. Using a participatory methodology, the book traces how publishing, film, broadcasting, and other cultural industries are converting to a casualized, high yield system of piecework, one in which a mysterious substance called content is at once the basic unit of production and a new form of value.