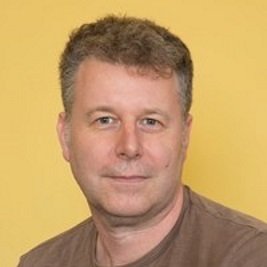 Andy Martin is an Associate Professor in the School of Physics at the University of Melbourne. He is obtained his PhD in 1996 and undertook various postdoctoral positions, within Europe, before being hired as a tenured member of staff at the University of Melbourne in 2004. During his research career he has obtained various significant grants from the Australian Research Council to fund his research and has written popular scientific articles in The Conversation. Additionally, he is currently the Associate Dean of Graduate Programs with responsibility for all of the PhD and MSc programs within the Faculty of Science.

His research focuses on the theoretical investigation of complex systems. The study of complex systems considers the ability of individual components of a large system to work together to give rise to dramatic and diverse structural behaviour. The emergent structural properties of a system are often not predicted by an understanding of the behaviour of the constituent parts, i.e.

In other words, the emergent structural properties of complex systems are considered to be greater than the sum of their parts, or as Nobel laureate Philip Anderson said: “More is different!”.

More specifically, Associate Professor Martin has worked on a diverse range of topics, from the investigation of superconductivity, dephasing effects and charge fluctuations in mesoscopic devices to modelling interfaces and disorder in high temperature superconductors and the breakdown of the integer quantum Hall effect. His ongoing research primarily focuses on the properties of ultra-cold quantum gases, with additional work on the use of nitrogen vacancy centres in diamond to measure topological phases; the development of new quantum meta-materials; the investigation of new strongly correlated states of light in coupled atom cavity systems and the emergence of defects in early universe dynamics.

While at Durham he plans to work closely with members of the Joint Quantum Institute at the University of Durham to investigate how dipolar interactions in quantum gases can be used to examine structural emergence in quantum systems. This collaboration would enable us to extend previous works, in the area of structural emergence in ultracold dipolar quantum gases, to look for new regimes where strong dipolar interactions can lead to new structural properties of the gas. This work has strong overlaps with the current experimental program of Professor Simon Cornish (Durham University), who is developing an experimental program to create ultra-cold polar molecules with significant dipole moments. Additionally, Associate Professor Martin would extend his ongoing research into flocking phenomena in biological systems. Flocking is displayed across a variety of biological systems. These systems vary widely in size, both in the physical extent of the system and the size of the group. For example, the spiral patterns and clustering motion of bacteria have been associated with flocking behaviour. This type of structure is also displayed in groups of microtubules, which are integral to maintaining cells and forming a basic scaffolding for the cytoskeleton. At a larger scale, flocking is observed in the motion of schools of fish and flights of birds; both in the way the groups move as a whole, as well as their response to predators. During his time in Durham will develop further a new method, based on statistical mechanics, to study flocking behavior in these systems. The primary focus of this area of research would be to generalize current approaches to enable the evaluation of measurable quantities such as average separation and fluctuations between elements of the flock.