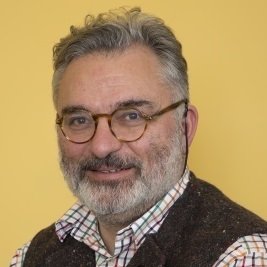 Professor Vasilis Politis was born in Athens, Greece, and educated in Denmark. In 1982 he went to Oxford, where he completed his B.A. (First Class), B.Phil., and D.Phil., with a Fellowship to the Stiftung Maximilianeum in Munich in 1984-1985. Since 1992 he has been teaching at Trinity College Dublin. In 2004 he was elected to Fellowship at Trinity College Dublin; in 2007-2008 he was Senior Research Fellow of the Irish Research Council; and in 2009-2010 he was Fellow at the Wissenschaftskolleg zu Berlin. He has held visiting professorships in Leiden University (Holland) and Wuhan University (China), and in 2017 he is a visiting professor in Uppsala University (Sweden) and Renmin University (China).

Professor Politis specializes in Ancient Greek Philosophy. With the publication of The Structure of Enquiry in Plato’s Early Dialogues (Cambridge, 2015), and following numerous papers in leading journals and presses, he recently completed a major research project, on the function of aporia—puzzlement and particular puzzles—in the method of argument and enquiry of Plato and Aristotle. The significance of this project has been recognized not least through the collection of papers due to appear on this topic, and covering the whole of Ancient Philosophy, by fourteen eminent scholars worldwide: The Aporetic Tradition in Ancient Philosophy (Cambridge, 2017), edited by Professor Politis and George Karamanolis of Vienna. He believes that this topic—the function of aporia in intellectual enquiry—is of great interest for philosophy generally and indeed beyond academic enquiry.

Professor Politis is currently working on a new major research project, which builds on the previous one—this being the project that he plans to advance and, if possible, bring to completion during the stay at the IAS. A central thesis of the previous project is that Plato shows that if we want to engage with and try to answer certain radical questions—and questions that are typically of a general human interest—then we are committed to the search for the essence of things. In the current project, he explores Plato’s great metaphysical theory, the theory of Forms, from this perspective. The aim is to demonstrate that the central commitments in Plato’s mature metaphysics can be derived from the basic commitment to intellectual enquiry and from the twin sources of radical enquiry: radical aporiai and the search for essences. The wider aim is to make Plato’s metaphysics live and significant in contemporary debate, in the way in which Aristotle’s metaphysics is live and significant in contemporary metaphysics.