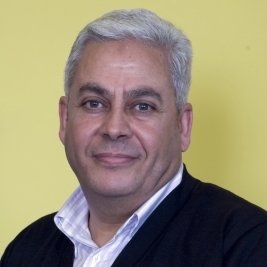 Muhammad Saidam is a senior researcher and currently the Director of the Environment Monitoring and Research Central Unit in the Royal Scientific Society (RSS) in Jordan, where he has worked since 1986. He gained his BSc in Civil Engineering in 1982 and his MSC in Water Engineering in 1983. In 1995, following the award of a three year Merit Scholarship from the Islamic Development Bank, he gained his PhD in Environmental and Water Resources Engineering from Imperial College London. In 1999 he received the Hisham Hijawi award in the field of agriculture and water in recognition of the distinguished applied scientific value of his work on appropriate low-cost water filtration. Dr Saidam has been an active partner in many regional, national, and international research consortia and an invited expert on a number of national and international consultative panels, including working with organizations such as the World Health Organization, UNICEF, and the World Bank.

Dr Saidam’s research interests lie in the area of water and risk, in particular water quality, and he has published work in a number of different fields including integrated water planning under conditions of water scarcity, wastewater management and reuse, institutional and policy framework analysis for autonomous desalination units, and decentralized small wastewater treatment units utilizing renewable energy. More recently, Dr Saidam has instituted an automated online water quality real-time monitoring system, as a new state-of-the-art technology concept, for advancing water quality and environmental monitoring in Jordan (2002 – present). The system facilitates swift and knowledge-based decision making in the water, environment, health, and agricultural sectors. Also, the system’s web-based database enables data sharing on the local, regional, and international levels. Part of the system has been located on shared water resources to facilitate cross-border arrangements to abate water quality deterioration of a resource that is already considered scarce. He has also obtained funding to introduce to Jordan, a testing and certification program for household drinking water treatment units and chemicals used in water treatment processes with the prime objective of protecting public health.

Since December 2008, he has been leading an inter-disciplinary research consortium, from RSS and three Jordanian universities, to profile and assess the presence of chlorinated hydrocarbons and infectious agents in surface waters. Utilizing a new perception of sampling, the researchers hope to improve chances of identification of contaminants normally found in only trace amounts or in few numbers in surface waters. This is to improve the potential in assessing health risks associated with water contaminants carried by surface waters supplying drinking water treatment plants. Dr Saidam will use his time at IAS to further his research into the concept of using sediments quality assessment combined with surface water quality as criteria to evaluate potential risk of contamination, with particular reference to chlorinated hydrocarbons and infectious agents (e.g. Cryptosporidium parvum). This will be pursued through networking with the research consortium in Jordan and fellow researchers in Durham.