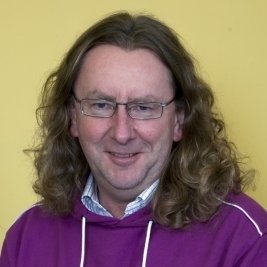 Ian Wright is a Professor of Planetary Sciences with interests that range from characterising the nature of space debris, to the origin and evolution of planets, to an ultimate question involving life. He started his university career at Birmingham where he studied Geological Sciences, before moving on to Cambridge where he developed his interests in the geology of anything other than the Earth. He subsequently moved to the Open University where he helped establish and develop the Planetary and Space Sciences Research Institute, which has subsequently become a Department comprising 70 staff (and which he headed for the last few years).

Over the years Professor Wright has designed and built a number of novel instruments all based around the use of gas extraction, separation/purification, and analysis by mass spectrometry. The instruments in question make analyses of any compound that can be converted into a volatile form (such as water). However, he does not consider himself to be an instrument builder first and foremost; rather, he has engaged with this praxis as and when it was appropriate for scientific ends. So, in the laboratory the instruments have been used in attempts to try and understand the evolution of the Sun (through analysis of particles of solar wind trapped in lunar samples), to describe the evolution of the planet Mars (through analysis of samples of the martian atmosphere outgassed from relevant meteorites), to investigations that have a bearing on the origin of life (by studying the organic building blocks liberated from asteroidal materials), and so on.

Developing space instruments was a natural progression from the equivalent laboratory versions. Such activity is often risky – one of his instruments is in pieces on the surface of Mars after the failure of the Beagle 2 mission. But he is currently the Principal Investigator of an instrument known as Ptolemy, which is on its way to land on a comet’s surface (on board the Philae Lander of the European Space Agency’s Rosetta mission). This will ultimately involve direct sampling of the ice, dirt and dust that make up the target. In other words, it will be possible to analyse pristine materials that originated at the birth of the Solar System, allowing scientists effectively to look back in time to a formative era that cannot be studied in any other way.

Lately Professor Wright has been working as part of a team who are aiming to utilise the experience of building miniaturised analytical instrumentation for space exploration, in the area of health care for humans on Earth (specifically, the early detection of tuberculosis, a project that is being funded by the Wellcome Trust).

Professor Wright shares a passion for planetary and space science with his wife Professor Grady. They have, over the course of two and a half decades, worked together on many research projects, and have published a number of jointly authored papers. Whilst at the Institute of Advanced Study, Professor Wright is looking forward to working collaboratively with Professor Grady and colleagues from the Departments of Physics and Earth Sciences, to develop some new research projects around the theme of water in the Solar System, and its role in the origin of life.