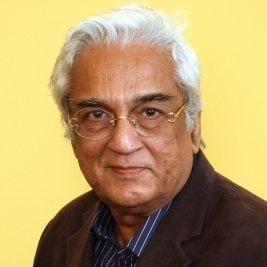 Gaekwad, scion of the Royal family of Baroda, India, was born in 1938. He holds a graduate and a postgraduate degree in Fine Arts from the renowned Maharaja Sayajirao University of Baroda. In 1959-60 he worked at the prestigious Royal Academy of Arts, London and was awarded a Diploma in painting.

At the Faculty of Fine Arts, Baroda, he was mainly introduced to the various Indian schools of painting under the tutelage of eminent artists such as Prof Bendre, Prof Subramanian and Prof Shankho Chowdhary. At the Royal Academy of Arts. Ranjitsinh further expanded his knowledge and expertise in the European Art. There he benefited greatly from the guidance of renowned British artists such as late Peter Greenham, Charles Mahoney, and other visiting artists who were involved with the Royal Academy Schools. As a young artist he won several awards, including the David Murray Scholarship for landscape painting, established for the RA Schools.

One man shows in India were a rarity in the 1960s. Also National and/or State level exhibitions were not that frequently held which meant that the young artist had limited opportunities to exhibit in India. Notwithstanding this, he held several exhibitions in various parts of India as well as in other countries.

On his return from the UK, Ranjitsinh got involved in family business and a few years later entered active politics. He was elected to the Indian Parliament for two five year terms. During this time art, especially painting took a back seat. After a gap of 15 years or so, Ranjitsinh returned with full vigour to the art scene. Since then he has had successful shows in Delhi and Mumbai and abroad.

In 2005 Ranjitsinh was invited to join in a senior artist’s camp/tour, in which a group of eminent contemporary artists painted and sketched as they traveled along the famous Silk Route in China. An Art Camp, in the country side of Baroda, organized by The Uttarayan Art Foundation, was another successful camp that he participated in. He recently held a show titled “Goats, Kings and Other Such Things” at the Inder Pasricha Gallery, London. This show, which consisted mainly of Ink Drawings and several sculptures, has been well appreciated.

Ranjitsinh has done several frescoes and sculptures for corporate institutions in India. Due to his multifaceted education, Ranjitsinh has evolved a different approach in his work. The impressionists have greatly influenced him and this is evident especially in the way he uses colour. He is a versatile artist, who works with various mediums, namely water colours, oils and acrylic. His drawings are also in various mediums – ink, pastels, charcoal, pencil, graphite etc. He is a self-taught sculptor. He feels any art work is a creative activity for visual experience and pleasure. Therefore every art work should convey something new even if the subject remains the same.

He has been invited many times to offer honorary help at the faculty to teach drawing to the postgraduate students. He has also conducted workshops in drawing and has been invited as a resident artist at École De Art at Caen in France.

Ranjitsinh has a passion for Indian Classical Music and is himself a vocalist of a very high calibre. He has been invited to give concerts at many music festivals in India. He is also fond of sports especially cricket and has represented his University and the Baroda Cricket association in their first class matches.

The given subject of water for the IAS Fellows is a challenge and of special significance to him. The importance of water holds a different dimension in India. In most parts of the country it is a matter of survival, whereas it also becomes a cause of destruction. He hopes to depict this and more in his work. He is looking forward to interaction with other fellow scholars as this will enrich and broaden his view point.

This Fellowship is supported by funding from the Grey College Trust.