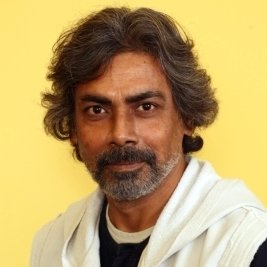 Filmmaker Sudheer Gupta, a significant voice in the new Indian & Asian documentary film scene, has degrees in Historical Studies & Film-making. At Jawaharlal Nehru University in New Delhi, where he did his Masters in Modern & Contemporary History in 1983, he has been pursuing a PhD in Popular Indian film history. He did his training as a Film Director from the prestigious Film & Television Institute of India at Pune (1984-87) and since 1988 he has made more than two dozen independently researched, directed and produced documentaries, as well as commissioned documentaries for Indian national television and for international TV networks like ZDF, ARTE, and YATV. His films have been regularly seen at Indian, South Asian, European, American and Estonian film festivals. For the last ten year he has been teaching at film-schools in India doing week-long documentary film-workshops.

Sudheer’s films have been about discovering the core values of Indian cultural, social and ecological realities, and unraveling truth, mysteries and politics in the contemporary Indian scene. His first independent work was the film ‘Darubrahma’ (The Wooden Lord), which was shot in the coastal state of Orissa in India, during the Navakalevara festival of Lord Jagannath in 1996. This film, originally 2hours and 30 minutes in length, has been distributed worldwide in a shorter 45 minute version by the University of Wisconsin since 2000. Another documentary film called ‘Searching for Saraswati’ was made by Sudheer in 2003 about the Mahakumbha festival of 2001, a festival held every 12 years on the river-banks at Allahabad. In this film, Sudheer single-handedly shot over the 42 days of the festival and produced a personal-political film about it. This film too, has been taken up by the University of Wisconsin for worldwide distribution. Since then Sudheer has shot all of his documentaries as the main cinematographer.

Between 1998 and 2001 Sudheer has shot 300 five minute documentaries for YATV Colombo, covering topics ranging from the environment, women, development conflicts, AIDS and daily life in North India. These were telecast by YATV on various South-Asian & S E Asian TV networks.

Sudheer made three documentary films in 2006 about Indian artists. In ‘Anant Kalakar’ (Timeless Artist) Sudheer unravelled the richness and large variety of folk singers and dancers in the desert-state of Rajasthan, mixed with their real-life woes. In ‘Kathputli’ (Puppets) Sudheer shot, over a period of 10 years, the struggle of street-performers in Delhi to get a legal home in the town. Set against a backdrop of declining opportunities to work at the mercy of erratic state-support and exploitation by opportunist political agents, these films were shown on national television and helped to bridge existing information gaps between rural/nomadic folk-artists in India hoping for opportunities in small and big towns, and the state-agencies who regularly utilized their services. In ‘Song of a Painter’, a biographical film about a rebel painter, Manohar Deolalikar who painted abstract urban landscapes, Sudheer put together a personal film in his memory.

In 2007, Sudheer made a few films for the United Nations Development Programme (UNDP) about the schemes for rural employment in India and produced an independent documentary film called ‘Yojana’ (The Scheme) which highlighted the inner contradictions and vox populi of the mismanagement in the rural employment schemes in the north Indian states of Bihar, Uttar Pradesh and Rajasthan.

Sudheer’s current focus is on ecology, environmental sustainability and damage-limitation and in 2005 he completed a documentary film for Indian television called ‘More Men In Black’ about a force of 10,000 recyclers-on-cycles extracting black-oil from industrial drains of Delhi. A bleak subject like drains & pollution was presented in an entertaining film that did not leave the viewer guilty and heavy-hearted, but informed, entertained and upbeat. This was achieved by using a dual discourse technique – one discourse focusing on the subject and a parallel discourse contrasting the subject with use of clichéd commercial Bollywood style dialogues in Hindi from Indian adapted versions of the Hollywood produced film ‘Men in Black’. The experimental story-telling in this film has been widely appreciated and in a similar style Sudheer produced a short documentary-fiction film in 2009, called ‘Choking’ about the contribution of 200,000 rag-pickers of the Balmiki caste, who voluntarily help clean and recycle large amounts of daily solid-waste production in Delhi.

At present, Sudheer is busy shooting a documentary about the disappearance of the Yamuna River from the Delhi area, as a result of increasing migration of people from north India to the city. While books will state that Delhi is situated on the banks of the Yamuna River, today the river has been reduced to a putrid black drain in Delhi. The working title of this film is ‘Black River Business’ and is not about civilizations settling next to the rivers but about civilizations destroying the rivers.

Whilst at the IAS, Sudheer will be concentrating on his work on the Yamuna River and flood-plain destruction & restoration. He is keen to draw on the experiences of those involved in the regeneration of the River Tyne and he will also be shooting for a short film about this river during the course of his Fellowship with the help and support of Northumbrian Water.