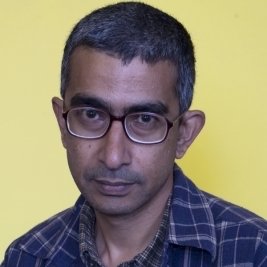 Surajit Sarkar has worked as a video filmmaker since 1991, creating television shows, documentary and educational films. His films have been recognised, screened and received awards, nationally and internationally.

Since 2001, Sarkar has been a member of the New Delhi-based “Deep Fried Jam” performance group as a video artist for multimedia stage and off-stage performances. He has worked with theatre and arts students in India and abroad, and with artists, musicians and video professionals working in small towns within India. In 2004, he co-founded a travelling video+arts initiative, the Catapult Arts Caravan, that has been working to catalyse public participation in civic debate in rural areas and small towns. Performers and performances of the Caravan see art, knowledge and technology as inter-related, with a focus on local resources and capabilities.

Partnering with community organizations and local artist networks, the Caravan performances use digital media to introduce participants to a new kind of storytelling. Beginning with the theme of Ising-i-Waapham (A Question of Water) in the Imphal valley of North East India, the shows have since expanded to include other sites of contestation like Land and Forest. Public discussion is designed to be part of the performance and exhibition, which combines digital audio-video technologies with local arts like storytelling, song, music, theatre, pottery and painting. By integrating these, the Caravan “re-presents” the local in the networked age by “re-assembling” elements of arts practice with widespread socio-cultural and technological change in India today.

Surajit Sarkar is also a founder member of the ‘Museum of Memory’ project. He is working with a network of individuals and organisations in Central India, to collect testimonies of rural change around land, forest and water (Jal-Jangal-Zameen). The focus is on recording personal histories and individual understandings, in communities in danger of losing their spoken language and associated knowledge and cultures.

Surajit Sarkar has also participated in electronic arts residencies in North America and India, and worked as a visiting professor of video in India and the USA. He has been on a Communications Advisory Panel for Civil Society groups, on the Public Advisory Board, Cultural Anthropology and is currently Lead Consultant for an Oral Knowledge Archive (NASSCOM Digital India).

In a previous incarnation, Surajit Sarkar wrote a set of mathematics teaching textbooks for the Indira Gandhi National Open University, New Delhi. His other writings include short stories, writings on education, technology and culture in various magazines and journals, from the Indian Institute of Advanced Study, and SOAS among others.

During his time at the IAS, he will be drawing upon notes, recordings and memory, to write about the experience and process of creation, and responses to local video documentary and ‘digital’ folk art performances. Of special interest are multiple perceptions of a shared space and ecology, evoked and articulated before, during and after the public performances and multimedia art installations of the Catapult Arts Caravan travelling through rural North East and Central India from 2004-09.